I'll meet you in the morning 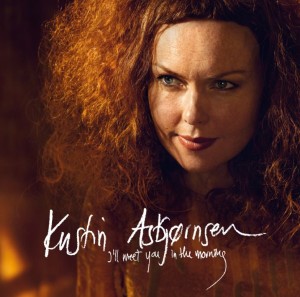 The new album glows with a shimmering dark heat, subdued yet raw, with hypnotic beats carried forward by the incredibly strong awareness in the way Kristin approaches the songs.

In 1990, Kristin inherited a number of sheets of relatively unknown African American spirituals from the Afro-American singer Ruth Reese. Kristin’s interpretations of this material resulted in “Wayfaring Stranger – a spiritual songbook” in 2006.

“Over time, the richness of these songs has strongly moved me. They so greatly embrace the complexity of life. As strong expressions of life, these folk songs have changed and have also created change – independent of time, place and faith.”

The songs are arranged together with Kristin’s musicians, and Anders Engen was invited as the creative producer and musician as well, in collaboration with sound-designer Ulf Holand (recording and mix).

The songs were recorded live, in the same room, and the album has developed a haunting, distinct and dynamic ensemble sound – where guitars, basses and percussions are woven creatively into a warm, organic vibration with dusty foot stomps, hand claps and call and response vocals.

The arrangements are coloured by the bare, acoustic expressions seen in “Wayfaring Stranger” as well as the quiet intensity from Kristin’s last solo-album “The night shines like the day”. This new album shows traces of soul and old African American gospel hymns, West African dance rhythms, Nordic contemporary jazz and contemplative church music.

“I’ll meet you in the morning” is about longing for movement, belonging and unification. The songs point to the changes in life – how we belong to each other yet how each of us must follow our own path alone.

“These songs – religious folk songs, passed down in the oral tradition by African slaves in the U.S. – address life issues that are still relevant today. I have been in dialogue with the material both as a singer and songwriter. It has been a long journey with the songs, for some it’s been 20 years. Sometimes I converted songs – interlaced fragments of various spirituals and wove in my own lyrics and music – thus transforming different spirituals.”

“I’ll meet you in the morning” has become a timeless and very personal album from this outstanding Norwegian singer. The music is a powerful, mesmerizing exploration of hope and reconciliation.