Singer and songwriter Kristin Asbjørnsen is one of the most distinguished artists on the vibrating extended music scene in Europe.

Over the last decade, she has received overwhelming international response from critics and the public alike for her personal and unique musical expression. Spring 2018 saw the release of Kristin’s long awaited solo album Traces Of You. Kristin’s enchanting songs, based on her commissioned work Traces of You for Global Oslo Music in 2016, were met with outstanding response. Kristin has written all music and lyrics.

Due to Covid-19 several concerts in Norway, Italy and Germany have been cancelled/postponed Spring/Summer 2020. During Autumn 2020 Kristin will perform some concerts in Norway, and when possible in 2021 continue to be touring in Europe in trio format with the kora player Suntou Susso and guitarist Olav Torget, performing songs from Traces Of You, as well as songs from her afro-american spirituals-repertoire.

Kristin is well known for her great live-performances and she is touring with two extraordinary musicians. The Norwegian singer has featured on a number of album releases, as well as a series of tours and festival performances in Europe. She has won several national Music Awards. In France, Kristin became the winner of the Mondomix Babel Med prize in 2009. Her previous solo albums I’ll meet you in the morning (2013), The night shines like the day (2009) and Wayfaring stranger (2006) were released across Europe via Emarcy/Universal. Wayfaring stranger sold to Platinum in Norway.

Kristin made the score for the movie Factotum (Bukowski/Bent Hamer) in 2005. Kristin collaborates with the piano player Tord Gustavsen. During many years Kristin focused on work with her musical ensembles Kvitretten, Dadafon and Krøyt.

On Saturday 19th September Kristin will perform at Hamar Teater with the stunning guitar combo Eivind Aarset and Olav Torget. 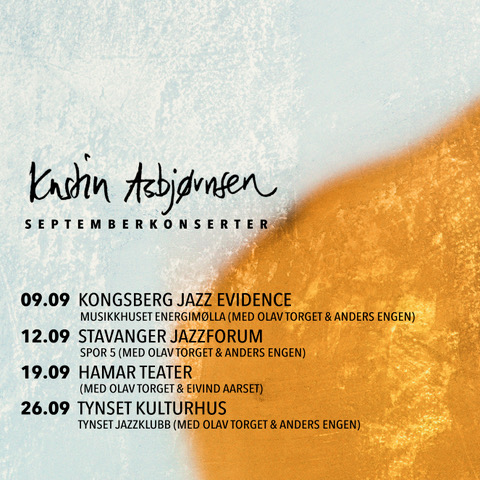 Traces of You Teaser